The beauty and harmony of Antonio Canova's Italian art meets the mastery of the art of wine.

Prosecco Doc chooses to celebrate the bicentennial of Antonio Canova's death with a tribute to his art, through the short film GENIUS MOVES THE WORLD. 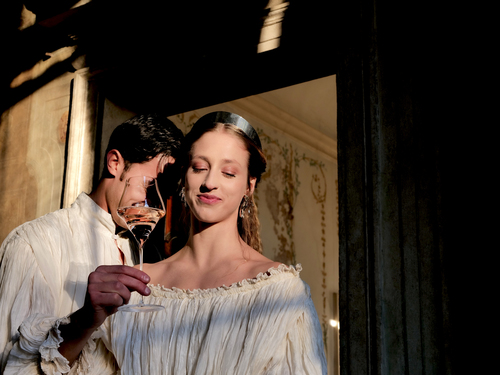 A short film about an exciting journey, conceived by director and philosopher of the image Carlo Guttadauro, transports us to the second half of the eighteenth century by encountering and discovering the atmospheres in which Canova moved, imagined, contemplated and shaped matter. In his grace is revealed the beauty of feelings found in tasting a glass of Italian Prosecco bubbles.

The narrative comes to life through the three protagonists: the young Antonio Canova played by Michele Piccolo, the statue of Hebe impersonated by Virna Toppi, first ballerina of La Scala Theater in Milan, and the cellarer of Prosecco DOC represented by Andrea Offredi.

It is art that moves the world, the art of a dancer who dances to tell the story of Hebe and the passion of a winemaker who harvests his fruit and finds it in a bottle.  From their gazes we capture the simplicity of beauty, which uplifts the ordinary into a work of art, the need to tell of a magnificent world where harmony and love find their forms thanks to the hands of man and his genius.

The common theme of the story is marble. A shape-shifting material that thanks to the experience, study and desire of the Italian Genius can be transformed. Antonio Canova generates beauty and from the same marble the winemaker finds his art in a bottle of Prosecco.

A deep narrative voice, as if reading a poem about beauty, colors that distinguish reality from a dreamlike fantasy where harmonic shapes float like an elegant ballerina. Here is born the idea capable of moving the world, capable of bringing wonder to a man's everyday life.

For Prosecco Doc it is an immense honor to recognize in Antonio Canova an Italian Genius that can be narrated.

"We are honored and proud to share with the supreme Maestro Canova the same Trevisan origins, humble, but with immense potential. Qualities that Antonio Canova was able to enhance by exalting the beauty of simplicity to the point that it was appreciated all over the world. Still today, as then, his works of rare elegance constitute the emblem of an artistic-cultural expression of great inspiration, traceable to an extraordinarily fertile territory such as Veneto, a generous land from every point of view," says the president of protection of the DOC Prosecco Consorzio, Stefano Zanette.

The tale of a genius from whose hands come ideas that revolutionize the world, the same genius that inspires every day the important work of research, production and enhancement of the Prosecco DOC Consortium's territory.